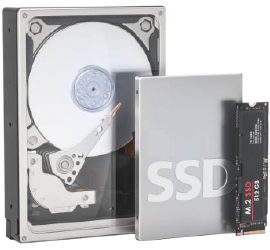 This technical document reviews the commands, architecture and processes implemented by WipeDrive Enteprise on platter-based, solid-state and NVMe drives. Details provided throughout this document are to provide customers with the processes implemented to meet global data erasure requisites. The document also details overwrite, verify and probes.

WipeDrive Enterprise has active certifications by Common Criteria, NATO, HIPAA Compliancy Group, ADISA and NCSC that the data sanitization process meets all government regulations and can be deployed to meet any OEM data erasure requirement. Multiple data erasure methods are supported including:

“An overwrite technology using firmware-based process to overwrite a hard drive. It is a drive command defined in the ANSI ATA and SCSI disk drive interface specifications, which runs inside drive hardware. It completes in about 1/8 the time of 5220 block erasure. It was added to the ATA specification in part at CMRR request. For ATA drives manufactured after 2001 (Over 15 GB) have the Secure Erase command and successfully pass secure erase validation testing at CMRR. A standardized internal secure erase command also exists for SCSI drives, but it is optional and not currently implemented in SCSI drives tested by CMRR. SCSI drives are a small percentage of the world’s hard disk drives and the command will be implemented when users demand it.”

WipeDrive is real world tested and examined on hard drives and SSDs daily because of ITAD certification and compliancy requirements. This ongoing testing by 3rd party forensic firms provides confidence to

All wipe functions overwrite disk storage, or use special erasure commands native to the drives, to ensure no residual data remains. After the sanitization process has been completed, an audit log is created which compiles verifications that the information contained on the hard drive was in fact erased.

The WipeDrive application serves as a single executable file that is primarily responsible for:

Note: Only a single WipeDrive application will be able to run on any single host at any one time. The Log Storage component is responsible for the storage of audit information. Log Storage refers to any external device with a file system that the WIPEDRIVE can access. Examples of these are a USB drive or a separate hard disk or partition upon the local machine being wiped.

The software generates and captures audit data which is used to provide further verification that an erasure event has occurred. Audit logs containing verification data (either denoting a success or failure) are stored internally to the WipeDrive application. The resulting output of a wipe operation is displayed in an easily interpretable manner. All audit operations can be associated with the administrator who performed that event.

Security is provided with XML and SQL logging, which is a way of determining if the log has been modified in a non-authorized way.

WipeDrive is primarily operated via the GUI interface. The GUI is also run on the same host as the back-end. This will be the default interface for x86 machines that framebuffer can be accessed.

WipeDrive is able to perform three distinct operations for disk erasure – scanning of devices, probing of devices, and the erasure of the devices. Scanning and probing are both performed during the initialization of WipeDrive while the probe operation is run each time a device is discovered. Administrators can execute commands via the GUI to wipe drives. The wipe command applies the administrator definable wipe pattern to each selected disk instance, which performs the overwrite operations directly on the disk.

The WipeDrive ISO supports Secure Boot. If the computer's BIOS supports it, Secure Boot will check the signature of important OS files at boot time to make sure that they haven't been modified. Since the Linux OS files are included with the WipeDrive program, this helps ensure that the OS and kernel that the WipeDrive application and UI are running on top of wasn't altered before being booted.

WipeDrive erases data present by overwriting it with a particular pattern of data, thus eradicating the previous contents of the disk. Each wipe pattern adheres to a specific approved standard, including official government and military standards in use today. Specific patterns such as all “ones” and all “zeros” are used in various wipe standards as defined below. The implementation of the wipe functions utilized is vendor-asserted.

Some wipes are designed to use random data, or to include full verification of each character written. The following list details the 20 types of disk sanitization methods made available to administrators of WipeDrive:

The steps necessary to scan a drive are listed below:

The steps necessary to probe a drive are listed below:

The steps necessary to wipe a drive that is a candidate for erasure are listed below:

WipeDrive certifies that when a success is reached on a wipe, all data on the SSD, NVMe and hard drives has been eradicated.

The commands, architecture and processes that WipeDrive implements allows the eradication of data on platter-based, solid-state, and NVMe drives. These functions require sophisticated communication between the hardware components. This communication would not be possible without advanced compatibility with all hardware manufacturers. WipeDrive's competitive advantage is it's longevity in the data erasure industry and the ability to perform properly on all drives it encounters. Not only is WipeDrive compatible with more hardware systems than anyone else, it has been evaluated and certified for implementation by government, military, corporate and personal use.

WipeDrive Enterprise provides clients with the freedom to manage their audit reports and customize their builds. With global certifications and a proven data sanitization solution by many of the largest corporations in the world, WipeDrive provides trust that all data is securely expunge on platter-based, flash-based and NVMe drives and USB sticks. Find out why more corporations and organizations use WipeDrive than any other data tool, contact our Sales Team at 801.224.8900.