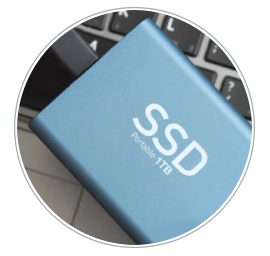 The widespread transition to solid state drives has changed the landscape for permanent data destruction. Sensitive data can be accessed with greater speed and reliability on an SSD, but erasing that data when required can be more challenging.

What Is A Solid State Drive?

Before solid state drives were introduced, HDDs were the norm. These traditional hard disk drives use platters that spin to allow data access—a mechanical process that is slower and more prone to failure than SSDs.

Solid state drives store memory in a chip format like a smartphone or USB drive. They are called “solid state” because they lack moving parts. The data stored on an SSD can be accessed at higher speeds, better serving the needs of large data centers and server arrays.

How Are SSDs Used In Enterprise Data Centers?

Most large data centers are somewhere in the process of converting to SSDs. Solid state external hard drives are still used in combination with HDDs in many data centers, requiring different protocols for data erasure. A solid state drive in a laptop or mobile device also requires erasure before destruction, repurposing, or resale.

How Data Destruction Changes For SSDs

Solid state drives are more difficult to sanitize with traditional methods. Your data management plan should include specific instructions for proper erasure methods for the new technology as it is phased into use to prevent unauthorized data recovery after destruction, donation, or sale at the end of its life.

As your company moves to SSDs, your data management protocols may become more complex. If you have questions about how software data destruction can keep pace with your enterprise system, the experts at WhiteCanyon Software can help.

Our WipeDrive software is EAL 2+ certified, meeting the highest standards of the DoD, NSA, and Homeland Security. Your business can request a trial and experience the ease of use and reliability of our data erasure software for yourself. WhiteCanyon Software has the right solution for any size data storage system and security level. Contact us today at 801.224.8900 for more information.