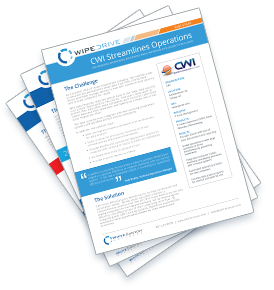 Data security is a top priority for our clients. We wipe every machine that comes through the door because we take security seriously. Our clients are very happy with our use of WipeDrive which has the best credentials.
Ivan Somyk, President, CWI

As a premier ITAD (IT Asset Disposition) company, CWI needed a way to securely and permanently erase data from their clients hard drives and other storage devices to maintain maximum data security and to prep computers for resale.

With data breaches reported almost daily in the news, data security is of utmost importance to CWI clients. End-user clients want to protect their data while lease companies want to protect both their clients data and their reputation and liability as a major link in the asset disposition chain.

The ideal solution must integrate with their existing proprietary systems and workflow without excess complexity.

In addition, the solution must:

CWI chose WhiteCanyon's WipeDrive for its data sanitization and automation needs. WhiteCanyon was able to deliver a comprehensive solution that met all CWI's requirements by not only wiping computers to the highest standard, but by improving the efficiency and effectiveness of their underlying work flow. By integrating with CWI's existng systems, WipeDrive automatically provided critical system data needed for their downstream processes.

Meeting the highest industry data erasure standards was a critical requirement for CWI. The chosen solution would have to meet their own strict quality and security requirements as well as give their clients a high degree of assurance that their data was securely erased.

Choosing WipeDrive made this the easiest and most straightforward requirement for CWI. WipeDrive is the only product on the market with the highest certification available, the NIAP EAL 4+. This demanding certification required over a year in laboratory testing to acquire and required the most strict testing available today including a source code review to ensure maximum security. According to the NIAP certification report, data sanitized with WipeDrive is “permanently destroyed as to make any data recovery impossible.”

WipeDrive is widely used in the U.S. Government, Department of Defense, and Fortune 100 companies making it a trusted and well-known name in data erasure. CWI has found its customers are satisfied and confident in WipeDrive as the data sanitization tool of choice.

Ivan Somyk, President fo CWI mentions, “Data security is a top priority for our clients. We wipe every machine that comes through the door because we take security seriously. Our clients are very happy with our decision to use WipeDrive which has the best credentials and reputation around.”

Because of the large volume of computers CWI processes, it was vital that the chosen tool be capable of processing computers quickly and in large quantities. In addition, they didn't want the wiping process to become a bottleneck in their work flow, preventing further processing while the drives were being wiped.

In addition to wiping a large number of simultaneous drives, CWI has continued to be impressed with WipeDrive's wiping speed. With newer versions of WipeDrive, they have noticed additional improvements to the processing speed. As Andy Bickley, a Technical Operations Manager reports, “Rack space is at a premium for us. We want to move computers through the process as quickly as possible. WipeDrive has continued to make improvements to speed up the wiping process.”

Because CWI has developed most of their systems in-house, it was critical for the chosen solution to be flexible and customizable enough to communicate and integrate with them. This would potentially mean not just a level of built in customization options but possibly some additional custom development work on the part of the provider.

WipeDrive was able to match the level of customization needed by providing a wealth of out-of-the-box customization configurations including the ability to share data to internal SQL databases. For further customization, WhiteCanyon's developers were able to make additional tweaks to the WipeDrive software to meet CWI's proprietary specifications. According to Andy Bickley “One of the biggest factors in choosing WhiteCanyon was their support and willingness to work with us through our customization needs.”

CWI wanted to automate the data entry process in order to accelerate their work flow and reduce errors. The time required for technicians to evaluate the hardware and enter the information into their system was prohibitive. CWI also had issues with data quality. In some instances technicians would inaccurately evaluate the computer hardware while in others errors were introduced through mistyping.

WipeDrive's system specification reporting was a perfect solution to CWI's data entry problem. Before the wiping process starts WipeDrive was able to pull comprehensive system information, including processor, memory, and hard drive specs, and send them to CWI's database making that information available to other systems. CWI was able to significantly reduce processing times and eliminate manual evaluation and entry data errors. According to Taras Somyk, Director of Sales and Business Development, “with the help of WipeDrive we have been breaking thru daily and monthly unit production levels while improving our quality. Because of the higher quality of data and improved accuracy, customer returns have decreased and our customers can make more informed purchasing decisions.”

Providing Data Erasure Reports For Internal And External Use

A large percentage of CWI's clients require proof that the wiping process was completed either through a comprehensive report or periodic audits. The required solution would need to make this process seamless.

WipeDrive had a variety of flexible reporting options and formats including the ability to share wiping results to their internal system which they could use to create reports containing not just the wiping results, but any other critical audit information the customer required.

For 20 years CWI has been consistently recognized as an industry leader in IT asset remarketing services. You can count on CWI to recover the greatest value for your IT hardware while effectively sanitizing your data.

Fill our the form below and we will contact you about how WipeDrive can best meet your needs.