What Does It Mean To Degauss Your Hard Drive?

Degaussers are named after Carl Friedrich Gauss and were first used to reduce ships' magnetic signatures as protection against magnetic naval mines during WWII. Today, a hard drive degausser is a device that allows you to destroy data on hard drives or other magnetic storage media.

How Does A Hard Drive Degausser Work?

When being used, the mechanism alters the magnetic charges that store data on the drive.

A hard drive degausser can quickly and easily erase hard drives from laptops, printers, computers, notebooks, copiers and PDA's. In addition, its strong magnetic field resets the media altogether so that it can be reused or recycled. It is the most powerful and reliable compact hard drive disposal unit. Many governments, organizations and military branches use degaussers.

The different types of degaussers include coil, capacitive discharge and permanent magnet.

A coil degausser has a copper wire that creates a strong electromagnetic field when being used. This type of degausser creates high heat and takes a few minutes to cool down.

The final type of degausser is the permanent magnet degausser. These degaussers can be used without breaks because there are no electrical components that can overheat. They can also erase several hard disk drives at a time.

There are two ways to measure degausser strength, gauss and oersted.

A gauss rating describes the strength of the magnetic field produced by the degausser.

Because there are different kinds of degaussers, it is important to look for the model that suits your needs.

Degaussing May Not Be Right For You

After degaussing, digital video cartridges, VHS videocassettes, and floppy disks can typically be reused, while only some hard drives can be reused. This is because, for modern drives, degaussing not only removes stored data but also removes servo control data.

If you don't need a large data erasing device or if you need a drive to keep operating after data erasure, you may want to consider using a software wiper such as WipeDrive. 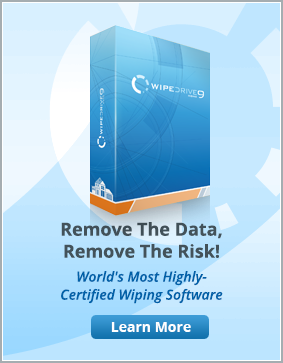